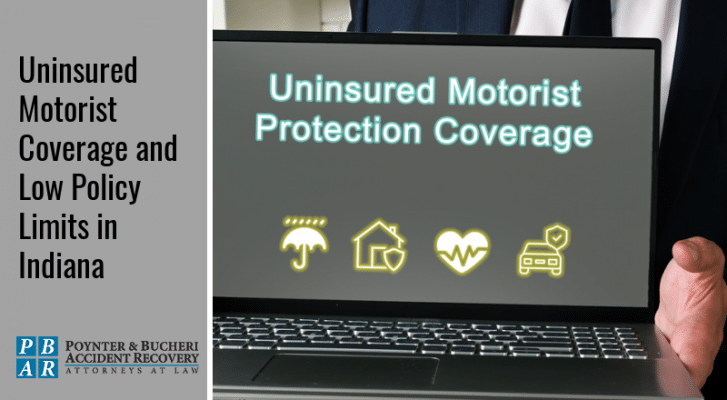 With some things in life, it’s best to buy the cheapest option to save money. With car insurance? Not so much. After reading this article, you will know the answers to these questions:

If you have ever been involved in a car accident, you know that bills can mount up. Not only are there vehicle and property losses, but also medical bills, and the cost of missed work. The cost of an ambulance ride alone can be frightening.

For example, even after insurance, the average ambulance ride costs $450, and the average air ambulance costs $21,700. Now add an expensive hospital bill and rehabilitation costs to that and you can see the problem.

You may think, “Oh, but the accident wasn’t my fault! The other guy’s insurance will pay for everything!” Not so fast. What if the at fault driver is underinsured? The minimum liability insurance coverage required in Indiana is:

What recourse do you have?

You can try to get a bigger judgment against that person and sue them personally for the excess amount that you get in a verdict. For example, if you get a jury verdict in your favor for $50,000, then you could go after the person who actually hit you for the excess amount of verdict over their insurance policy limits. However, the insurance company will only pay you their policy limits of $25,000.

And, unfortunately, it costs money to go to court. You have to pay for doctors to give expert testimony. You have to pay for depositions. Basically, you are spending money in the hopes that you will be able to collect that additional $25,000 from that individual. Sadly, chances are that if they have minimum insurance policy limits, it’s because they couldn’t afford higher ones. They probably don’t have a lot of assets for you to go after.

If you take the underinsured motorist to court, you may be able to get a judgment for their wages to be garnished for a period of time, but if they change jobs, you would have to spend the time, effort, and money to go back to court and start again. There is also a risk that the underinsured motor vehicles could declare bankruptcy if he or she isn’t able to pay the judgment against them.

That’s just underinsured drivers. Even worse — what if the at fault driver isn’t insured at all? Or what if you have been the victim of a hit and run accident? Yes, of course, everyone who operates a motor vehicle is required to have car insurance, but whether they do or not is another matter entirely.

So how can you protect yourself?

Remember that these are the minimum limits. You can pay for higher limits. The uninsured and underinsured motorists coverage allows you to collect these damages from your own insurance company.

You may wonder if simply having good health insurance for yourself is enough, but you may have a high deductible. Also, unlike your health insurance, UM (Uninsured Motorist) coverage will include pain and suffering.

Speak to your insurance agent about purchasing Uninsured and Underinsured Motorist Coverage and learn more about the Indiana underinsured motorist statute. If you have any further questions about the information in this article, please feel free to reach out to us at Poynter & Bucheri.

Hi, I’m Rich Bucheri from Poynter & Bucheri, and today I want to talk about uninsured motorist policy provisions, why they’re important, and how low policy limits can affect your settlement.

So, the minimum insurance coverage that somebody has to have in Indiana is $25,000. And if you can imagine that somebody that gets into a car accident and goes to the hospital, and then has to follow up with some type of physical therapy, or maybe even surgery and misses a few weeks off of work, then when we’re talking about the amount of damages that’s going to be related to that case, it’s going to be well in excess of $25,000.

And, unfortunately, if the person only has $25,000, then that may be the only money that’s available to compensate that person from the third party. Some people will tell me, “Well, why is it that they are able to get away with the fact that they only have $25,000?” Unfortunately, that’s all that’s required by the laws here in the State of Indiana.

Now, you can try to get a bigger judgment against that person and go after them personally for the excess amount that you get in a verdict, for instance. Let’s say if you got a jury verdict in your favor for $50,000, then you could go after the person that actually hit you for the excess amount of verdict over their insurance policy limits, but the insurance company is only going to pay you their policy limits of $25,000.

And, unfortunately, it costs money to go to court. You have to pay for doctors. You have to pay for depositions. So, you’re basically spending money on the hope that you’re going to be able to collect that $25,000 from that individual. And the fact of the matter is if they have minimum insurance policy limits, then they probably don’t have a lot of assets to be able to go after.

Maybe you’re going to be able to drag them into court and garnish their wages for a period of time, but then at some point in time they’ll probably change jobs, and then you’ll have to go back to court and get it again. You’re getting a very piecemeal amount of money over a period of time, and that’s assuming that they don’t even file bankruptcy, which they may be able to do if the judgment against them is large enough that it’s worth it for them to do that.

So, when you’re taking into consideration the low policy limits that a person has, that’s why it’s so important to make sure that you have uninsured or underinsured motorist, and understand the Indiana underinsured motorist statute, so that if that person doesn’t have sufficient policy limits to cover any type of substantial injury, that your insurance can kick in above and beyond what they have to make sure that you are fully compensated the way you should be for the injuries that you sustain.

So, talk to your insurance agent about making sure that uninsured motorist coverage is something that you have on your policy. If you have any other questions, please give us a call at Poynter & Bucheri. Thank you.