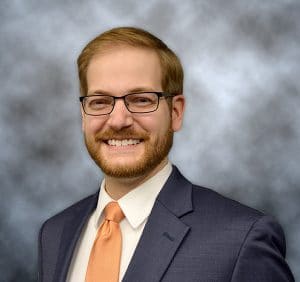 Born in Beech Grove and raised in Greenwood, Mr. Norman graduated from Indiana University in 2011 with a Bachelor of Arts degree in History. Mr. Norman was an active participant in the Indiana University Marching Hundred and Big Red Basketball Band, being named one of the section leaders for the trombones his junior and senior years. Mr. Norman then attended Valparaiso University, where he graduated in 2014 with a Master of Arts – Liberal Studies degree. While at Valparaiso, he was a member of the Graduate Student Advisory Council, where he addressed the concerns of graduate students, planned activities, and made recommendations to the Graduate School. Mr. Norman then attended the Indiana University Robert H. McKinney School of Law in Indianapolis, graduating in 2017. While attending McKinney, he was a participant in Moot Court.