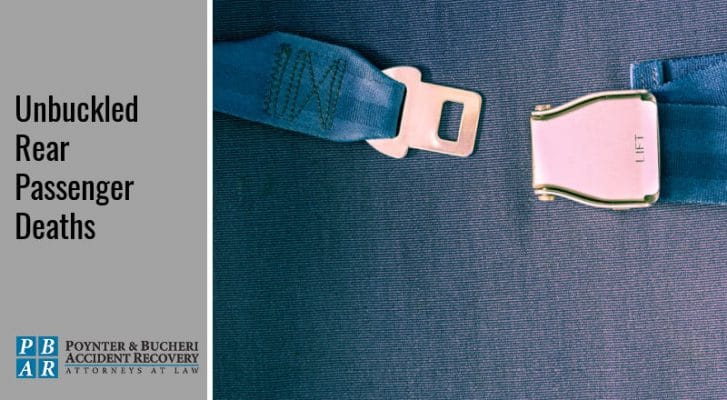 What you’ll learn from reading this article:

Most people recognize the importance of wearing seatbelts. Back in 2000, only 70.7% of front-seat passengers used seatbelts, but as of 2019, that number is 90.7%, according to the NSC (National Safety Council). Obviously, 100% would be better, because seatbelts are an essential tool in protecting vehicle occupants from death and injury in traffic collisions.

Some people have taken the invention of and efficacy of airbags as a sign that seatbelts are no longer necessary, but that couldn’t be further from the truth. Airbags were designed to be used in combination with seatbelts rather than as an alternative to them. In fact, airbags can even be forceful enough to seriously injure or kill you if you are not buckled up.

The NHTSA (National Highway Traffic Safety Organization) reported that in 2017 alone, seatbelts saved an estimated 14,955 lives and could have saved an additional 2,549 people if they had been wearing seatbelts.

Even more encouraging than the growth rate of seatbelt use in the United States is the fact that Indiana’s overall seat belt rates have actually exceeded national rates since 2009. According to the ICJI (Indiana Criminal Justice Institute), 93% of all Indiana passenger vehicle occupants wore seatbelts in 2018. That’s the average, but the car occupants had an even higher rate of compliance: 96%. Truck occupants had only 84% compliance.

Both nationally and in Indiana occupants in the rear seat were far less likely than drivers or front-seat passengers to buckle up, (75% as opposed to 90% in 2017). As of 2017, only 28 states and the District of Columbia had laws requiring seat belts for all passengers. Also, only 35 states had primary enforcement laws.

These are laws that allow law enforcement officers to stop a vehicle for the sole reason that an occupant is unbelted. (In the remaining states, an officer of the law would only be able to issue a ticket to an unbelted rider if the vehicle had been stopped for another reason.) You will be glad to know that Indiana is one of the states requiring seatbelts for all and with primary enforcement laws, both of which have a clear connection to the state’s higher than average seatbelt use.

Why is it important for rear-seat passengers to be restrained?

Studies by the NHTSA show that in potentially fatal crashes involving back seat occupants age 5 and older (as you can imagine, there is a high rate of compliance for parents protecting their infants and very young children) the risk of fatal injury was reduced by 32% for people in cars and 63% for people in vans and SUVs who wore lap belts. The number is higher for shoulder belts.

Not only is it safer for the individual himself to be belted, but it is also safer for those seated in the car with him. Unless they are restrained, passengers in the rear can become a projectile capable of harming others, especially in a frontal crash.

What are the seatbelt laws in Indiana?

You or a loved one may have been injured in an accident that was not your fault. Let’s just say that you were not wearing your seatbelt at the time. Can you still sue the at-fault driver for your injuries or for the death of your loved one? Yes. The fact that you weren’t buckled up doesn’t change the fact that the other driver caused the accident. The other driver would not be able to use the “seat belt defense” to argue that your injuries were worse because you weren’t wearing a seat belt. Indiana doesn’t have the seat belt defense.

Indiana also does not have “no-fault” insurance. What this means is that the driver who is at fault is liable for your damages, medical bills, lost wages, long-term treatment, funeral costs, and any other expenses resulting from the accident. You need to prove that the other driver was at fault, and this is where you need an experienced and qualified accident attorney, like the ones at Poynter & Bucheri.

If you are injured in a car crash, seek immediate medical attention and then call our office to consult with one of our Indiana car accident lawyers. Visit our contact page to request a free case review or call 1-800-265-9881 or (317) 780-8000 to speak with a representative.