What Goes in a Good Demand Letter? 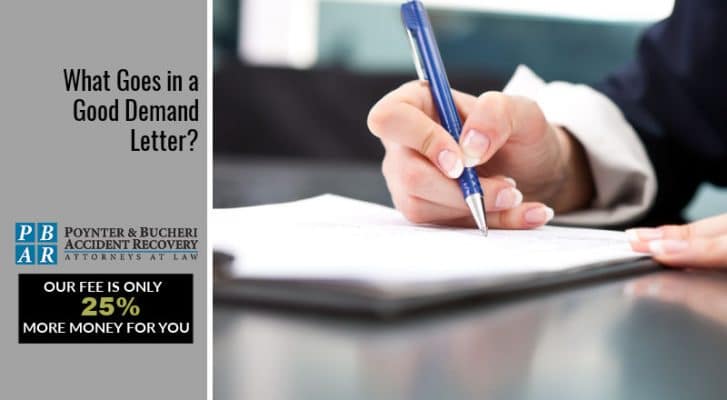 What Is a Demand Letter?

A demand letter is an official letter sent by a law firm to an insurance company demanding a specific amount of compensation for injuries suffered by the client. Used as a tool by lawyers throughout the case, the demand letter serves as both documentation and an outline for the lawyers should the case proceed to litigation.

What Does a Demand Letter Do?

When breaking down a demand letter, the important elements include:

The demand letter will first and foremost put forth the facts of the case. In the case of a car accident, for example, these facts will be drawn from the police accident report and any witness statements. Specific details of the accident will be provided, such as the road the individual was driving on, what type of vehicle they were driving and how the accident occurred. It will then discuss liability, medical records and finally damages before putting in a demand for compensation.

By laying out all of the known facts of the case, a demand letter summarizes the accident, injuries and financial losses of the client as the result of the accident. Usually itemized, these noted damages provide the evidence and impetus for fair compensation.

The lawyer will go into as much detail as possible when discussing your injuries, providing important information about how they were sustained, how they were diagnosed, and how they affect your physical, mental and emotional life. The narrative of your treatment will be recounted, from any ambulance trips from the scene of the accident to emergency room treatments, diagnostic testing, surgeries, follow-up appointments, physical therapy and more. Each specific appointment, treatment and bill in your medical record will be documented, examined and explained. This provides a clear and comprehensive picture of the injury and its impact on your life and finances.

After detailing your medical history, the letter will itemize damages from your medical bills and property damages. If you’ve suffered from lost wages and/or future lost wages, the lawyer will tally these up. The letter will also attempt to put a number on the noneconomic damages you’ve suffered, such as the pain you’ve had to endure due to the injury and anguish you’ve experienced.

Finally, the letter will make a demand. Due to X, Y and Z, the client has suffered this amount, and we demand this amount in compensation by this date. While it would be rare for the insurance company to agree immediately to the terms laid out, the demand letter provides the starting point for getting your case settled.

Why Use a Demand Letter?

Having an attorney draft a demand letter to an insurance company after you’ve suffered an injury due to the negligent actions of another party can be a great first step towards recovering compensation for your physical, emotional and financial losses.

If you or a loved one has been injured physically or mentally by a person, product or company, you need to know your legal rights. Our personal injury attorneys are experienced with cases like yours and can evaluate what your case may be worth. We will ensure that you are protected and compensated for your injuries and losses.

Hi, I’m Rich Bucheri from Poynter & Bucheri and today I want to talk about what goes in a good demand letter. So a demand letter is something that we and other law firms send out to the insurance companies, demanding an amount of compensation for the injuries that our clients have. So the first thing we do is we’re going to talk about the facts, what happened in the case.

So if it’s a car accident then we’re going to get a lot of facts from the police report and from the witness statements. Our client was driving on such and such highway, they had the right of way and then your client ran a stop sign and slammed into the side of her. Then we’re going to talk about our theory of liability. So what was it that causes them to have to pay for your injuries and your damages?

Then we’re going to, based on that, make a demand to the insurance company. As a result of your insured’s negligence, we demand such and such amount for compensation, whatever that amount may be. Obviously we will go over that amount with you before we make it. But basically this demand letter is a tool that is often referred to throughout the case, even if you’re not able to get the case settled right after you send the demand letter, because you can rest assured the insurance company is not going to say, “Yeah, we’re going to pay whatever you ask for.” What they usually will do will counter with a much lesser amount, but we’ll have this demand letter, which we’ll use as an outline for how we litigate the case later on. Then if we have to present the case to a jury, we will have an outline there as well.