Why Insurance Companies Have an Advantage in Jury Trials 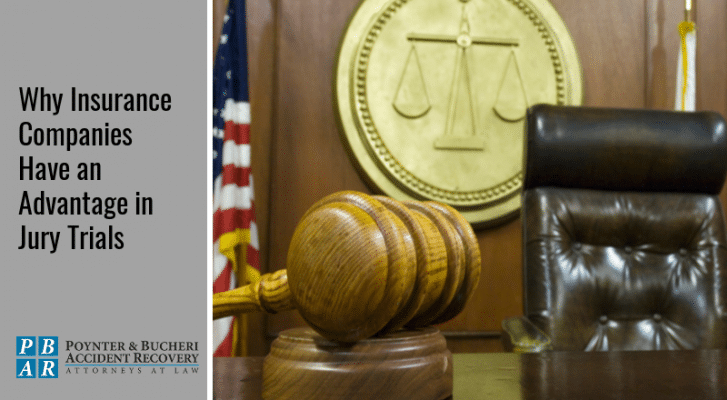 “The greatest trick the Devil ever pulled was convincing the world he didn’t exist” This quotation from an 1864 short story by Baudelaire is more widely recognized as the final rousing line in the 1995 movie, The Usual Suspects.

We are not trying to imply that insurance companies are evil, but they certainly do have an advantage in jury trials for one peculiar reason: jurors are led to believe that they don’t exist.

Evidence that a person was or was not insured against liability is not admissible to prove whether the person acted negligently or otherwise wrongfully. But the court may admit this evidence for another purpose, such as proving a witness’s bias or prejudice or proving agency, ownership, or control.

Most personal injury cases, in fact, 95-96% of them, are settled before they go to trial. Cases that do end up going to trial will likely be bench trials (decided by a judge) unless a written request is made for a jury trial. Although it seems counterintuitive, plaintiffs actually win more bench trials than jury trials, according to the U.S. Bureau of Justice statistics.

One of the reasons for this is the fact that jury members may make assumptions based on the absence of mention of insurance. While the trial is going on, the defendant that they see before them is a person — a fresh-faced teenager, an elderly woman, a nondescript pizza delivery driver, and so on. Juries may hesitate to lumber individuals with huge payouts because they may feel sorry for them. They don’t realize that the individual is insured and that all of the expert witnesses and expenses are being paid by the insurance company. They also don’t always realize that any compensation you (the plaintiff) would be awarded would come from the insurance company rather than directly from the pocket of the defendant.

Insurance companies prefer jury trials over bench trials for this reason and also because they can be dragged out and delayed. It often takes years to schedule jury trials; they are often also expensive. Insurance companies count on the fact that most people will settle out of sheer desperation rather than going through that arduous process.

It may be that the only reason you and your lawyer decided to sue is because you were being lowballed on a settlement figure. You may be faced with thousands of dollars of medical bills, lost wages, and unimaginable pain and suffering, and yet the insurance company is focusing on its bottom line and offering an inadequate amount of compensation. None of this can be mentioned in your jury trial.

Jury members should realize that most personal injury attorneys work on contingency, meaning that they won’t get paid unless the case (or settlement) is successful and the plaintiff gets paid. Lawyers are unlikely to take on a case (spending many hours of work plus incurring costs) against an individual without insurance who would not be able to pay. For that reason, jury members should make the assumption that the plaintiff has insurance. Sadly, they don’t always do that.

If you have any questions about what to do in this situation, or if you need help with your personal injury case, please give us a call at Poynter and Bucheri Accident Recovery Attorneys.

Our experienced personal injury attorneys work on a contingency fee, which means that if you do not win your case, you will pay no attorneys’ fees. Most firms charge 33% or 40%, at PBAR our fee is only 25% – THAT’S MORE MONEY FOR YOU!

Video Transcript
Why do insurance companies have an advantage in jury trials? The best trick that the devil did was convince the world that he didn’t exist. That’s a line from a very popular movie, but it holds true for insurance companies today if you would believe it.

In Indiana, as in most jurisdictions, if you go to a jury trial, you are not allowed to mention the fact that the person or the entity that you’ve been dealing with this whole time is not the little lady that hits you or the young teenager that hit your car. But it’s been in fact, the insurance company that has been low-balling you on the offers and dragging things out and refusing to settle. And the reason is that basically, as a matter of a rule of evidence, you are not allowed to mention insurance companies or insurance coverage or what the potential policy limits are to a jury.

The insurance companies were able to get that into law and as a result, you are at a disadvantage because people on the jury assume that this person that is sitting there, who they are going to feel sorry for, is not going to be able to pay the thousands of dollars that you are requesting in damages, even though you may be entitled to that money because you were severely hurt or you had to deal with months and months of pain and suffering, or you have lost wages. And because the insurance companies cannot be mentioned, many times the jurors will simply assume that there are no insurance companies involved and that that money is coming out of the pocket of the person that’s sitting at the defense table. And that’s simply not the case most of the time.

If you have any questions about what to do in this situation, or if you need help with your personal injury case, please give us a call at Poynter and Bucheri Accident Recovery Attorneys.