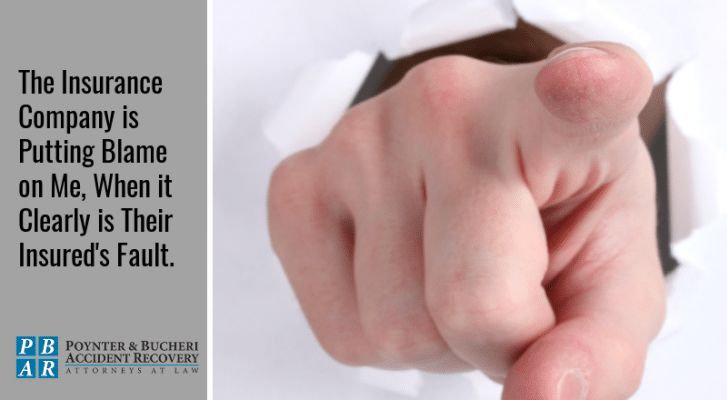 Although it would be wonderful if insurance companies worked to provide justice for all and full compensation for those injured in accidents that weren’t their fault, this isn’t always the case. The world of insurance doesn’t exist for altruism; it exists for profit.

We often see the situation where an accident is clearly not someone’s fault, and yet the insurance company is reducing their payout by 10-20%. Why would they bother to do this?

Indiana has a modified comparative fault negligence system, which means that one or more individuals can share in the liability for an accident. Each party’s contribution to the accident factors into the amount of damages he or she can recover.

If an individual’s percentage of fault reaches or exceeds 51%, he or she is barred from recovery. In other words, if you had the right of way in the broadside collision and the other driver was found to be at least 51% at fault, he or she cannot receive compensation. The part of the law that affects you if you were not at fault and that may lead an insurance company to try to blame you is this: If you are held partially liable (but 50% or less), your compensation is reduced by a proportional amount.

You can understand why it would be beneficial for the insurance company to assign some of the blame for the accident to you: it would reduce the amount they have to pay out. So, for instance, if an accident is 100% the defendant’s fault, the insurance company of the at-fault driver has to pay 100% of the damages. If they claim that their driver is only 80% at fault, then they can discount the damages that they pay to the plaintiff by 20%.

Who Decides Percentage of Fault?

Ultimately a jury would decide this if the case goes to court, but in negotiations, each party can argue what they want. For example, a company may say, “We know that our client ran the stop sign, but we still think that you were 20% at fault because you should have seen that he was running the stop sign and slowed down to avoid the accident.” Of course, that’s a ridiculous argument and one that would have a very difficult time winning in court. But insurance companies use specious arguments like these to delay and to put economic pressure on you.

Unfortunately, insurance companies know that you are in a vulnerable position because you are without a car to use. You have a deductible to pay with your own insurance, and any delay means that you’re not getting it back right away. You probably have medical bills and are lacking money from not being able to work. The insurance company is hoping that you will be in a position where you simply can’t wait past all of the delays it conjures and that you will agree to a quick settlement, even if it isn’t the amount you are actually entitled to.

An experienced car accident attorney can help maneuver past common insurance roadblocks by:

Insurance companies have a duty to act in good faith, so if their delaying tactics or refusal to investigate are egregious, a lawyer could help you file a lawsuit against them.

These are some examples of potential bad faith violations:

Often, just the fact that a personal injury attorney is working with you is enough to prompt insurance companies to settle the case fairly. They don’t want the hassle of a lawsuit, and they realize that you are not going to accept blame for something that wasn’t your fault or to settle for a lesser amount just for the sake of expediency or because you are worn down.

If you have any questions about your case or how to deal with insurance companies that are trying to blame you for an accident that’s clearly not your fault, call Poynter & Bucheri accident recovery attorneys.

Video Transcript
Hi, I’m Rich Bucheri from Poynter and Bucheri. And today I want to talk about a situation where I see all the time, an accident is clearly not somebody’s fault, but the insurance company is giving that person 10 or 20%. So if you’re in a jurisdiction like Indiana, which is a comparative fault state, the reason why it’s important what percentage each party is at fault is that the defendant is able to discount what they may be able to have to pay in damages by the percentage of fault of the plaintiff. So for instance, if an accident is 100% the defendant’s fault, they have to pay 100% of the damages. If they’re only 80% at fault, then they can discount the damages that they pay to the plaintiff by 20%. And so who decides this?

Well, ultimately a jury does, but in negotiations, each party can argue whatever they want. And it’s beneficial for the insurance companies to argue that a certain percentage of fault is the plaintiff’s at the time of negotiations, because then basically they can discount what they say is a fair offer. And there are insurance companies that, as a matter of course, as a matter of policy, will always try to put fault on the insurance companies. And so what you do is they will say, “Hey, I know that our client ran the stop sign, but we still think that you were 20% at fault because you should have seen that he was running the stop sign and slowed down to avoid the accident.” And of course, that’s a ridiculous argument and one that would have a very difficult time winning in court. But what they do is they use that argument to delay and to put economic pressure on you.

You’re without your car and if you run it through your insurance, then you got to pay a deductible, and you don’t get your deductible back right away. And so, they’re just hoping that you’ll say, “Okay, forget it, just give me what I can get, and then I’ll be done with it.” And what I would encourage you to do is to be as patient with the process as you possibly can. And it’s always better to have some leverage on your side in the form of an injury attorney that has experience in dealing with these insurance companies and knows how to combat them by, first of all, not accepting a diminished value on your case because of comparative fault when it doesn’t exist. And also two, asking for the proper amount of damages as it relates to whatever your injuries were or whatever your other damages were.

If you have any questions about your case or how to deal with insurance companies that are trying to blame you for an accident that’s clearly not your fault, call Poynter and Bucheri accident recovery attorneys.