Why You Should Fill Out an Incident Report 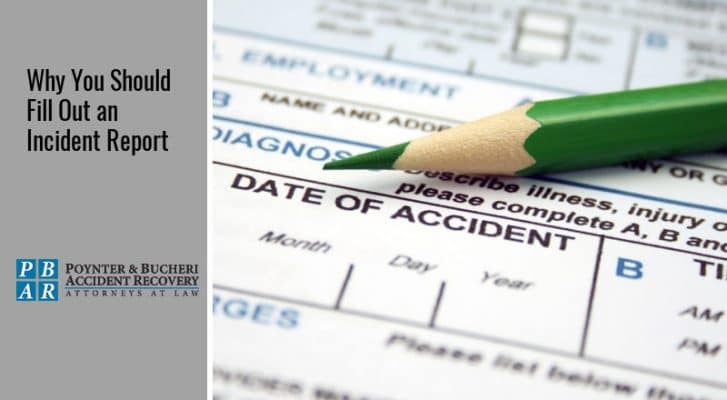 If you’re injured in a slip and fall case, one of the very first things you should do is fill out an incident report. You can do this by contacting a manager or asking a store employee to get you the manager. Oftentimes people are afraid of “causing trouble” after a fall, but beginning a paper trail is essential should you choose to seek damages.

The Importance of an Incident Report

An incident report will serve as Exhibit A for your slip and fall case. It serves as the first documentation of your fall. It also begins the process of evidence preservation. By filling out a report, you have alerted the store to your fall and the circumstances of it, placing the burden on them to begin to save elements involved in the incident.

Oftentimes you will want to send a formal letter asking the store or business to preserve evidence, including but not limited to video recordings of the area in which you fell, names of employees who were working in the area at the time, and the item itself that caused your fall if possible. While many stores will have policies in place to preserve this evidence, it can’t hurt to formally request it.

An incident report also gives you the opportunity to collect and retain the information of any witnesses to your fall. Curating a list of witnesses, as well as the names of the store employee and the manager’s name, is an important aspect of completing an incident report. This list will serve as a record of individuals who saw your fall and your resulting injury, and could later be called upon as witnesses in your case.

Sometimes, a store will request that you provide a taped statement or a detailed and signed description of the incident in addition to the standard incident report.

Be very careful of providing either of these.

Depending on the type of fall and injury you suffer, you may not be in the best position to provide accurate details. Additionally, we will often provide more information than is necessary when put in these positions, which can later come back and be used against you. Should you provide certain information in one way during a taped recording and later recall the information differently, you could undermine your own case.

Before making any formal statements, it is in your best interest to consult a slip and fall injury attorney to discuss the kinds of questions you might be asked and better prepare you for how many details to provide.

How to Fill Out an Incident Report

When filling out an incident report, you should be careful to include certain aspects of your fall.

Don’t simply state that you fell, but rather where in the store you fell and what caused you to fall. Simply falling in a store is not enough to have a claim; you want to be sure to identify that it was because of negligence that you fell.

This means detailing that there was liquid on the floor without a caution sign, identifying a loose wire, pointing out an icy sidewalk, or noting that an item was placed somewhere it should not have been.

You want to be clear that your fall is the direct result of negligence on the part of the store. An employee or someone should have maintained the aisle as a common and safe walkway.

Don’t feel pressured to provide a long explanation of what you were doing when the fall occurred, or to apologize for getting hurt.

We will sometimes, in the moment, take the blame for things or apologize to be polite, or say that we are “fine” when we really aren’t in order to avoid awkward situations. This is not a time to do this. You were injured due to someone else’s negligence; you have a right to not be okay and report it.

Make sure to collect and include the names and phone numbers of anyone who saw you fall and witnessed your injury. This includes the names of store employees and the manager themselves.

Make sure that whether it is a form you fill out or a dictated statement, that you receive a copy of your incident report. As a safeguard, you may even take a photo of the report with your cell phone after you have filled it out.

This way, any changes that could occur to the report have a history of not being made by you; additionally, if the report were to become lost, you have more than one copy.

Additionally, this means you have a record of what you said and the witness names to refer to later on in your case.

Suffering a slip and fall injury can be an unfortunate and unwelcome surprise. One minute you’re going about your business, and then next you’re in pain, and all because of someone else’s negligence.

Contacting a qualified personal injury attorney with experience in slip and fall cases is your best bet to maximize the compensation you deserve after a slip and fall injury.

If you or a loved one has been injured physically or mentally by a person, product or company, you need to know your legal rights. Our personal injury attorneys are experienced with cases like yours and can evaluate what your case may be worth. We will ensure that you are protected and compensated for your injuries and losses. Don’t hesitate—one of our experienced attorneys can assist you right away.

Hi. I’m Rich Bucheri from Poynter & Bucheri. Today I want to talk about why you should fill out an incident report if you’ve been injured. When we’re talking about why you should fill out a report, first of all, the circumstances are you’re in the big box store or some other type of store and you slip and fall on maybe a liquid that’s in the aisle or some type of item that’s been misplaced by someone that’s in the aisle; someplace where it should not be that poses a hazard to you, and so you fall. What you should do is you should immediately fill out a report by requesting a manager or requesting an employee to go get a manager, because this is documentation. It’s going to be the first evidence of your fall or injury. This is going to be Exhibit A in your case, as far as showing that you did in fact fall.

Two, it immediately starts the mechanism of preservation of evidence. The store is on notice that you fell, and so it’s going to be incumbent upon them to save things like the item that you actually fell on, the video tape of the area where you were at, the names of the employees that were in the area. You should probably follow that up with a formal letter to the big box store telling them that you need to preserve evidence, but this incident report is going to put them on notice that something happened and they should have policies in place to keep evidence just in case they are going to need it.

Now, beware of giving a taped statement or a very detailed statement as far as what happened when you’re giving your report. The reason why you want to do that is at the time that you were giving this report, if you’re injured significantly, you may not be thinking clearly. But it’s always a good idea to consult with an attorney before you give any type of formal statement, so that they can prepare you and give you an idea of what kind of questions are going to be asked and what kind of details that you should really pay attention to as far as what you say and what you shouldn’t say, so you don’t sink your case right from the very beginning. It’s very important that you beware of giving a lot of detail or a lot of information to them other than just the general basics of what happened when you fell.

Hi. I’m Rich Bucheri from Poynter & Bucheri, and today I want to talk about how to fill out an incident report. If you’ve been injured at a big box store or the grocery store and you’ve reported your injury to somebody and they’ve gotten the manager, a lot of times that manager is going to want you to fill out some type of report. I actually think this is a pretty good idea, because this report is basically Exhibit A of your case and it’s evidence that shows that you were actually injured at their store.

When you fill out this report, it’s very important that you ID the specific cause of your injury. Don’t just say that you fell, but if it was on a liquid, say that it was on a liquid, or if it was a box that somebody had misplaced, then say it was a box that somebody had put there. Make sure that you identify the mechanism of how you fell, because if you’re not able to say how you fell, then oftentimes it’s very possible that you will not be able to make a case, because you have to show that they were negligent. Simply falling in a store does not mean that you have a case.

You have to show that somebody at that big box store made a mistake by either not maintaining the aisle or making sure that something was cleaned up properly or that somebody misplaced inventory and put it in a place where it was a common walkway and they should have expected somebody to fall there. So make sure you identify the specific cause of your ID. Now, I wouldn’t get into a lot of other detail as far as how it happened. I would just say that I fell, I tripped over or I slipped on, and then be very specific about what it was that you actually fell on.

Keep it simple. By that, I mean, don’t get into your life’s story of every time that you’ve ever been in there or who or where you were going at that time. All we’re doing here is we’re trying to document the fact that you were injured and that you know what it was that was the mechanism of your injury.

Then third, make sure that you ID witnesses that we might need to talk to later on. Whether it was other civilian witnesses, people that were there just at the store, customers just like you, or if it was employees, like the person that you reported it to or maybe an employee that saw what happened or the manager that was taking the incident report. Make sure that those names are written down on the report and you know who those people are.

Finally, get a copy of what you fill out. If you’re actually filling something out or if they are taking the statement, then you need to insist that you get a copy of it. If you have your camera phone with you, I would actually take a picture of what it was that I stated before I give them the report. Make sure that you always have a copy of what you said so that they can’t say that you said something else later on down the road.