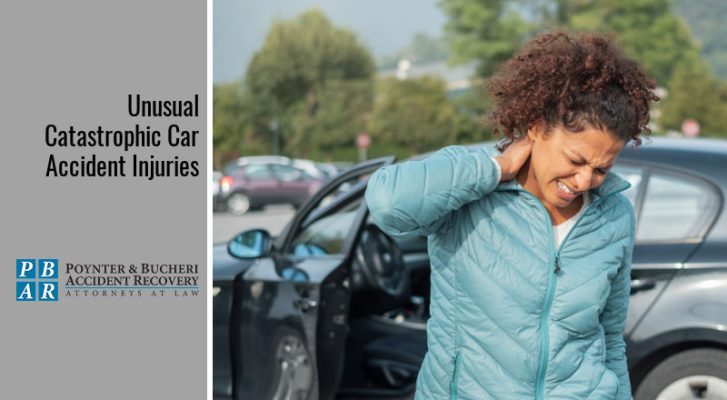 Any motor vehicle accident will feel traumatic and catastrophic if you are in it, simply by its shocking nature. Pain is always a catastrophe to the person experiencing it. However, we are using the term “catastrophic injury” to signify physical damage that causes any kind of long-term or permanent consequences. For example, injuries like brain damage, loss of limbs, or paralysis are all catastrophic because their severity results in the inability to continue life and employment in the same way as before the accident. Catastrophic car accident injuries can require extensive and expensive medical intervention and a continued set of obstacles that challenge the injured person.

The NHTSA reports that in 2020, 2,282,015 people were injured in motor vehicle crashes in the United States. You are no doubt aware of typical injuries resulting from car accidents: traumatic brain injuries (TBI), whiplash, concussions, internal bleeding, and broken limbs. However, many other catastrophic car accident injuries can occur, albeit, rarely.

A Boston University study found that older adults (over 65) had an increased occurrence of heart attacks and strokes in the weeks and months after being involved in car accidents. Also, a head injury can cause a hemorrhagic stroke, which is what happens when a blood vessel in the brain ruptures or leaks.

Even a minor injury to one of the deep veins in the body (usually the leg) has the potential to cause deep vein thrombosis (DVT), a potentially dangerous blood clot. The blood clot can break free and travel to the lung (this is called a pulmonary embolism), causing difficulty breathing or even death. According to research cited in WebMD, “as many as 1 in 13 blood clots may be caused by small problems” or injuries. After an injury accident, it is extremely important to be on the lookout for symptoms such as leg swelling, pain, warmth, or redness.

Post-traumatic stress disorder may not appear to be a catastrophic injury because it isn’t immediately visible like a physical injury; however, it can be debilitating. According to the NIH, 39.2% of adults and 6%-25% of children involved in serious accidents develop PTSD. Symptoms include emotional and physical reaction changes, sleep disorders, mood swings, and memory issues.

The blunt force trauma of a car accident can cause injury to the abdomen as it is pushed forward against the seat belt. This is so common that it has a name: seat belt syndrome. However, in some rare cases, damage to the small intestine (small bowel) may not be apparent until long after the accident. In one case, the delayed SBO (small bowel obstruction) happened two years after the initial accident. One should always seek medical care immediately if experiencing abdominal pain, swelling, nausea, constipation, or loss of appetite.

A blow to the head can cause damage to the skull where cerebrospinal fluid (CFS) leaks out through a hole in the dura and the nose or ear. Although this is treatable, it must be confirmed and located by tests such as the pledget study and the CT cisternogram. Surgery is recommended because of the danger of meningitis.

In 2020, there were 175,816 motor vehicle accidents in Indiana, 808 of them fatal. It’s important to understand that catastrophic injuries require expensive medical care and can potentially be life-changing.

Insurance companies are loath to part with money and will often simplify complicated cases. The Indianapolis car accident attorneys at Poynter & Bucheri are experienced in knowing how to use evidence to prove the pain and suffering of non-economic damages as well as economic damages, such as medical bills, medical equipment, and lost income. They understand that injuries have far-reaching effects and fight for the maximum amount of compensation you deserve.

The Statute of Limitations for Indiana (IN Code § 34-11-2-4 ) lawsuits is two years. The pain of being involved in an accident that results in an uncommon catastrophic injury may last anywhere from days to years after the incident. Don’t let a personal injury disrupt your life without speaking to a qualified attorney like those at PBAR to help you seek compensation.