My Accident Report Is Wrong. Now What? 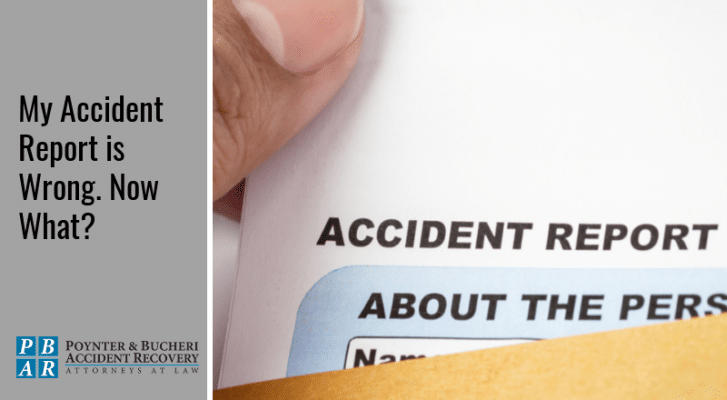 By reading this article, you will learn:

An accident report is an official document written by a responding officer at the site of a crash. It includes specific details about the accident that may be used in future settlement talks or in a future lawsuit.

What is included in an accident report?

In each one of these accidents, a state trooper or police officer responded and wrote an accident report. As you can imagine, given the sheer amount of information and the fraught circumstances of most road accidents, there were bound to be some mistakes. Officers of the law are fallible, just like everyone else.

How do I access the accident report from my crash?

There are a few options, such as contacting the state police directly or asking your lawyer or insurance company. However, the most frequently used option is to use the Indiana State Police endorsed website to purchase a copy.

The website is called BuyCrash.com, and it allows you to use a credit card to order the report online or to download a mail-in form which you can submit with a money order or certified check for $12 (as of July 2021).

Perhaps you have never seen an accident report before; you may need to decipher some of the abbreviations or codes. This Indiana code sheet will assist you in interpreting the report.

Suppose that you have received the report and understood all of the notes and codes on it, but you find a mistake?

Remember that the accident report is just one piece of the puzzle. Other pieces of evidence your lawyer may use to fight your case:

Why is this important?

While some states are no-fault states, Indiana is an at-fault state, meaning that at minimum, one driver is always responsible for the accident.

In Indiana, we have a negligence system that is referred to as “modified comparative fault,” which means that liability can be held by one or more parties involved in an accident. In order to file a claim and receive compensation, an individual must be responsible for less than 51% of the accident. Even if you are found to be liable for a percentage of the accident, you may still qualify for compensation due to the negligence of the other parties involved.

In general, if you know that you are correct and that the accident report is incorrect, don’t give up. If you are strong in your convictions and can convince an attorney that your case can be proven, you can still file a lawsuit based on the fact that you were not at fault. As far as who is at fault, the opinion of the police officer is not generally admissible in court. All sides will have to attempt to prove their case in front of a jury.

At Poyner & Bucheri Accident Recovery Attorneys, we are happy to talk to anybody about their case. Please call 1-800-265-9881 for a free case review.

Video Transcript
Hi, my name is Richard Bucheri from Poynter & Bucheri Accident Recovery Attorneys. And this is a situation that happens every once in a while, I get phone calls on it, and it is a situation where the person thinks that the police report is wrong and they want to know what they can do. And particularly, a lot of times what happens is because the police report is wrong, the insurance company on the other side won’t pay any damages because they’re trying to say that their client was the one who was not at fault. And that the person that was injured is. And there are situations where police officers, just like everyone else, make mistakes. They don’t put the right person at fault, or they misplace the vehicles on the diagram, or they don’t identify a person correctly, or they don’t want to file a witness correctly, or they rely on a witness that got it wrong.

So just because the police report says you’re wrong, does not mean that you’re not able to move forward through the case. But you do have to understand that it does make it problematic, it does make it difficult. And if you have a case, it’s a 50/50 case, that can be a difficult case too, and you may not have a good opportunity to be able to get a lawyer to take that case on with the risk. But it’s always good to ask around. Usually, most consultations are free. And certainly here at Poynter & Bucheri Accident Recovery Attorneys, we’re happy to talk to anybody about their case. So if this is a situation that you’re in, please give us a call. Thanks.