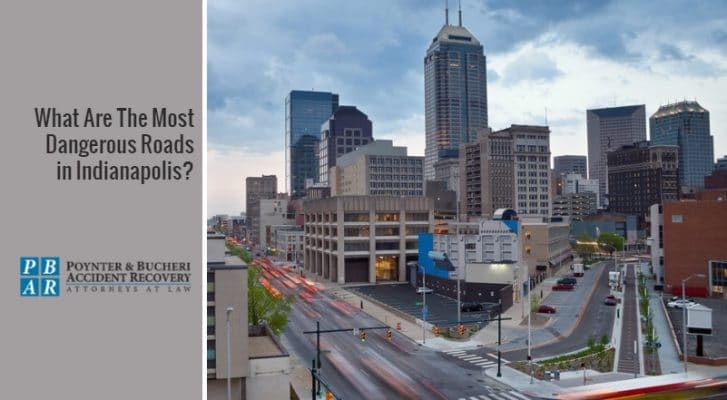 How do you avoid an accident that could change your life forever?

Every time we get behind the wheel, we are taking our lives in our hands. Traffic accidents usually happen without warning and the results can be tragic. By focusing on safe driving habits and staying aware of other motorists in our path, we have the best chance of avoiding a life-changing car accident.

Indianapolis is certainly not exempt from the peril caused by unsafe drivers. We’re taking a look at where Indiana stands in relation to the rest of the United States and identifying the most dangerous roads in Indianapolis.

Indiana is a Dangerous Place to Drive

What’s more, National Highway Traffic Safety Administration figures show roughly 40% of all crashes in the U.S. – and 21% of all deadly crashes – occur at intersections.

Why Intersections are Dangerous

Intersections are one of the most frequent sites for accidents thanks in large part to cross traffic. Complex intersections with multiple lanes of traffic traveling in and out of an intersection are confusing at best, even for motorists who take the same route on a daily basis.

When you add in factors such as pedestrian traffic, road construction work, distracted drivers, poorly labeled signs and lowered visibility due to overpasses, the possibility of an accident starts to climb.

Do you routinely drive through Indy’s most dangerous intersections?

In the last two years, Indiana saw an increase in traffic accidents. Accidents went up by 10%, with an alarming rise in motorcycle fatalities (up 44%) and pedestrian fatalities (up 25%).

A total of 911 people were killed in traffic accidents in Indiana, according to statistics compiled by the U.S. Department of Transportation (USDOT), National Highway Traffic Safety Administration and published in an annual report written by the Indiana Criminal Justice Institute. Indiana experienced a 10.9% increase over 2016 when 811 people fell victim to car accidents.

Statistics also indicate a dramatic rise in motorcycle, pedestrian and passenger fatalities, and accidents caused by motorists under the influence of alcohol. The 144 motorcycle accident fatalities were the most seen in Indiana since 2012, when 152 motorcycle fatalities occurred. The 107 pedestrian fatalities that occurred was the highest number since 2004.

What Factors Are Contributing to the Rise in Motorcycle Accidents?

A 2018 report from the Indiana Criminal Justice Institute, which monitors Indiana accident statistics to identify methods of making roads safer, addresses the issue.

According to Will Wingfield, spokesman for the Indiana Criminal Justice Institute, two main contributors have added to the increase in motorcycle fatalities. The first is unendorsed riders, people who have not completed proper safety training and demonstrated riding skills. They are overrepresented in crashes, according to the traffic safety report. The second is the rise in the number of drivers, in both motorcycles and cars, who are shown to be above the legal alcohol limit.

Along with motorcycle fatalities, pedestrian fatalities have seen an increase in Indiana. In 2017, Indiana ranked 12th highest for such tragedies. Patch.com reports walking across the street in Indiana is more dangerous than any time in the past 25 years, citing the latest information from the Governors Highway Safety Administration. The GHSA reports this statistic is trending nationwide.

“Two consecutive years of 6,000 pedestrian deaths is a red flag for all of us in the traffic safety community. These high levels are no longer a blip but unfortunately a sustained trend,” Executive Director Jonathan Adkins states in a release. “We can’t afford to let this be the new normal.”

If you or a loved one has been injured physically or mentally by a person, product or company, you need to know your legal rights. Our personal injury attorneys are experienced with cases like yours and can evaluate what your case may be worth. We will ensure that you are protected and compensated for your injuries and losses. Why pay up to 40% in attorney fees? Our fee is only 25%* and we fight to win your case or you pay no attorney fees at all. Don’t hesitate – one of our experienced attorneys can assist you right away. Call 1-800-265-9881 for a free case review. * Disclaimers: 25% fee ONLY on car accidents cases that are resolved prior to jury trial. Client remains responsible to pay for all costs, expenses and medical bills, regardless of settlement or recovery. Liability and medical causation must not be disputed. This 25% fee is valid for only 15 days after date last advertised.